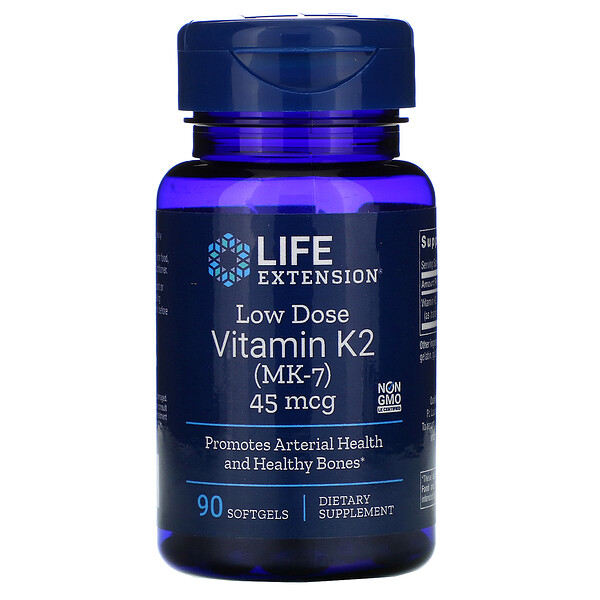 An abundance of clinical data reveals that vitamin K plays a critical role in maintaining healthy bone density by facilitating the transport of calcium from the bloodstream into your bones.

Vitamin K is also required by matrix Gla-protein (MGP) and other calcium-regulating proteins in your arteries. MGP needs vitamin K to function properly. Without sufficient vitamin K, inactive MGP can build up in your arteries, allowing calcium to bind to the arterial wall.

As we age, it is especially important to maintain sufficient levels of vitamin K for both arterial and bone health. Adequate vitamin K intake has been shown to be vitally important to healthy bone density in postmenopausal women.

Vitamin K2 (a group of related compounds called menaquinones) is found in meat, eggs and dairy products. K2 is also made to some extent by bacteria in the human gut, which provides a certain amount of your vitamin K requirement. Still, vitamin K supplementation is a good idea, and K2 is an ideal choice.

Human studies show that vitamin K2 is up to 10 times more bioavailable than K1. Plus, vitamin K2 remains biologically active in the body far longer than K1. For instance, your liver filters vitamin K1 out of your system within eight hours. But measurable levels of K2 (MK-7) have been detected 72 hours later.

The Rotterdam Heart Study, a large-scale, well-controlled clinical trial that tracked 4,800 participants for seven years, revealed that participants who ingested the greatest quantities of vitamin K2 in their diet experienced better cardiovascular health than people who ingested the least. High intakes of vitamin K2 also corresponded with lower levels of calcium accumulation in the aorta.

If you are taking anti-coagulant or anti-platelet medications, or have a bleeding disorder, consult your healthcare provider before taking this product.